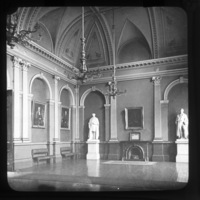 College of Physicians - Royal. [...] The first Hall is generally called the Statue Hall. It is of the Corinthian order, and is 60 feet in length by 30 feet in breath, and 32 feet high. The walls are divided into bays by pilasters, and the coved ceiling springs from an enriched cornice. It contains statues of Past Presidents, which are all of great merit [...] There are also a number of portraits 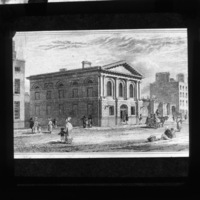 College of Surgeons - Royal. [...] In 1809, a College was built on the Friends' burial-ground on the west side of S. Stephen's-green, having frontages to the green and York street. This forms the south wing of the present building, the frontage of which was completed from a design by Wm. Murray in 1827.

Columba, Catholic Church of S. - Drumcondra, erected on Iona road in 1905 from the designs of Ashlin and Coleman, for the combined parishes of Drumcondra and Glasnevin, is a most successful example of Hiberno-Romanesque style. It is built of cut granite with limestone dressings [...] Both exterior and interior ae of rich design, over the principal door is an arcade, above which is a fine rose window. 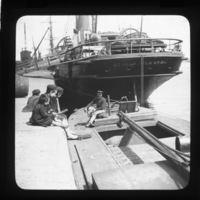 Commerce. [...] The chief export of Dublin is Porter, of which the average export is about 450,000 hogsheads. Whiskey also is largely exported. Horses and other live stock make a large total ; other exports are wool, glass, iron, and seeds. 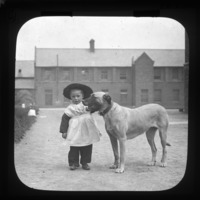 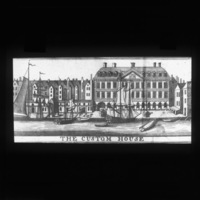 Custom House. The old Custom House (1707), successor to the old Crane (CITY WALLS), stood near Essex-bridge, where an arm of the Liffey ran in to join the Poddle ; and when its decay and want of accommodation rendered it useless, the building of the South Mole allowed its successor to be built further down the river, where ships had ready access. 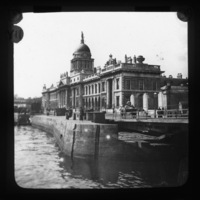 Custom House. [...] The present building stands on the north side of the river, separated form the water by a wide quay, and with a wide open space at the back. It is built of granite and Portland stone, and is one of the finest buildings in Dublin.