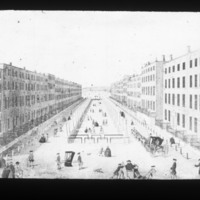 Sackville-street, running from Carlisle Bridge to the Rotunda, is now the finest street in Dublin, but only gradually attained to its present proportions. [...] The name Sackville (from the family name of the Duke of Dorset) was applied to the upper part in 1756. This portion was widened (to the west) and trees planted in the centre, and a walk made named "Gardiner's Mall." 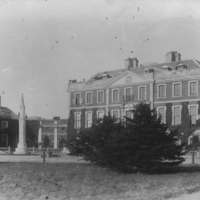 Santry. A small village two miles from Dublin on the great Northern road, was a model village once, but has fallen into decay during the years Santry Court was vacant. [...] Santry Court is a superb large square building in Jacobean style ; marble sculptures, monuments to favourite horses and dogs, and a large artificial lake testify, as does the luxuriant planting, to the former magnificence of this place. 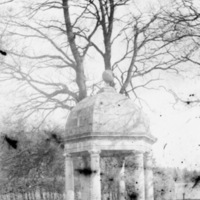 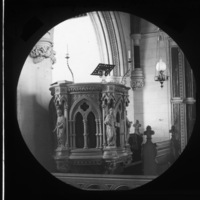 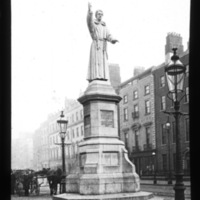 Statues. Dublin possesses many statues and public monuments, some of which are but little ornament to the city. [...] Among the most recent additions to the public monuments of our city is the Father Mathew Memorial Statue in Upper Sackville-street. The figure of the great Temperance Reformer, in the habit of the Capuchin Order, is a beautiful piece of work from the studio of Miss Mary Redmond (1893), and is a notable addition to our public statuary. 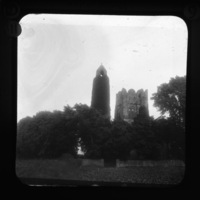 SWORDS CHURCH AND ROUND TOWER.

Swords, an ancient borough 3 miles distant from MALAHIDE, which was once its port, and 8 from Dublin. The town is now remarkable chiefly for its archaeological remains. The Ancient Abbey and Round Tower of Swords are conspicuous objects for miles around. [...] Beside the Abbey is the very fine ROUND TOWER, now covered with ivy.