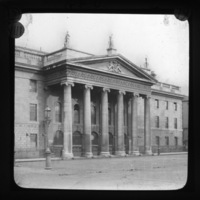 General Post Office [...] The present fine building (1815-18), was designed by F. JOHNSTON, and cost £50,000. It has a frontage of 223 feet and is built of granite ; its portico, projecting over the pathway, is one of the features of Sackville-street. This portico is 80 feet long, and has six massive fluted Ionic columns, a richly carved frieze, and a pediment surmounted by three fine statues by the younger Smyth. 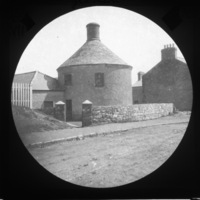 Glasnevin is a quiet little village prettily situated on the banks of the river Tolka about two miles from Dublin ; it consists of a single street with some picturesque old houses. [...] The Ink-bottle School house, the appropriate shape of which was said to have been suggested by Dean Swift, was ruthlessly pulled down in 1901. 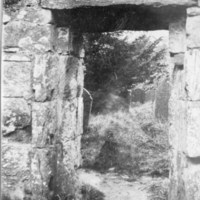 Glendalough, the famous vale of the Seven Churches, lies about 8 miles from Rathdrum [...] The Cathedral, of which the nave is 48 ft. by 21 ft, and the choir 25 ft. by 21 ft. The east window is enriched by chevron and other ornaments. 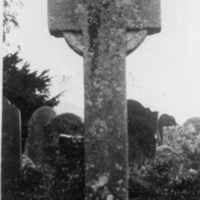 Glendalough [...] there are many other ecclesiastical remains scattered through the valley - stones, crosses, &c., while innumerable legends are told by the guides about almost every bush or well in the glen. 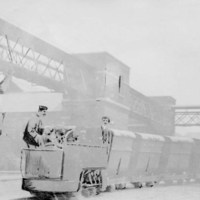 Guinness' Brewery in S. James' Gate stretches down to the river, on which the Company has large wharves. [...] railway lines with little special trains plying backwards and forwards in the busiest manner give one a fair idea of the amazing traffic of this great firm.