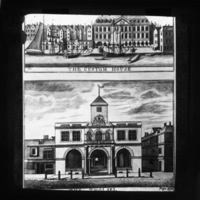 Tholsel. The meetings of the Common Council and of the Court of Conscience used to be held in a building called the Tholsel, built in the churchyard at the corner of S. Nicholas-street (now Christ Chiurch-place) ; it was designed by Inigo Jones and was of rich Jacobean style. [...] there is no vestige of Tholsel left ; it has disappeared and the ground was let for building in 1807. 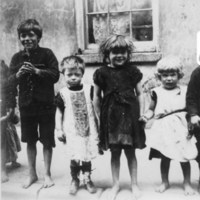 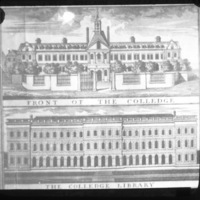 Trinity College was founded in 1591 by Adam Loftus near the site of the Nunnery of S. Mary de Hogges (Hoggen-green), outside the city of Dublin, as may still be seen on the official seal of the University in the words "juxta Dublin." [...] The original front is depicted in Brooking's Map of Dublin (1728), and consisted of buildings very similar to those of Queen Anne's period with dormer windows. 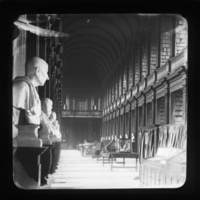 Trinity College [...] To the visitor quite the most interesting thing to be seen within the walls of "Old Trinity" is the Library [...] The present Library was erected 1712-1732 [...] The rapid increase in the number of books has made it neccessary to enclose the ground floor, which before 1892, was an open colonnade. The western portion of the space so gained is now utilised as a reading-room for those who are permitted to read in the Library. 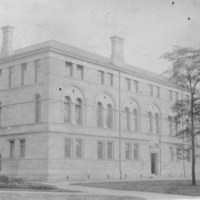 Trinity College [...] On leaving the Library the visitor should pass into the College Park, where the students are usually to be seen engaged at cricket or football. At the pavilion end are the great building of the Trinity Medical School, which is famous all the world over. 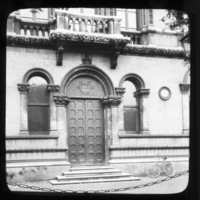 Trinity College [...] On re-entering, the New Square, a visit must be paid to the New Buildings - quite the most beautiful erection in Trinity College. Designed by Deane & Woodward, it was erected in 1854-5 at a cost of £26,000. The noble building is in the style of a Venetian palace, and has won the highest praise from no less capable a critic than Mr. Ruskin. 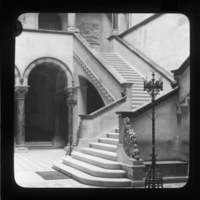 Trinity College [...] The Entrance Doorway and the main hall, both of which are illustrated, are extremely beautiful. The hall is rather suggestive of Moorish Art. All the marbles used are Irish, and the general effect is extremely good. The clock upon the stairs is regulated by an electric current from DUNSINK OBSERVATORY. 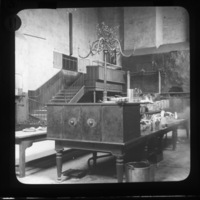 Trinity College [...] The Kitchens immediately below the dining-hall, together with the Cellars, the Buttery, &c., are quite worth a visit, and the Clerk of the Kitchen will tell may a quaint story of the doings of many of our most dignified citizens of the early parts of last century, when they were "College boys." The average number of diners in Term amounts to some 300, and the roasting and baking arrangements will make the lady visitor open her eyes! 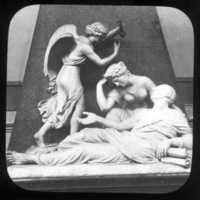 Trinity College [...] The Baldwin monument is the work of Hewston, a Dublin Artist, who executed it in his studio at Rome. The figures represent the great Provost dying, while the University weeps as she supports his drooping head, and an angel points to the crown of immortality which she carries in her hand. The sarcophagus is of porphyry, and the cost of the monument was almost £1,500, including the cost of bringing it from Rome to Dublin.