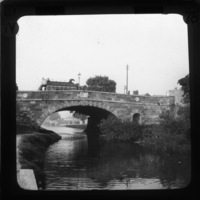 ON THE ROYAL CANAL

Canals. [...] The Royal Canal, incorporated 1818, and since 1845 the property of the Midland Great Western Ry. Co., runs parallel to that line as far as Mullingar, from which it branches off towards Longford, and so to the Shannon. The traffic is carried on by private traders, who pay toll to the Company. 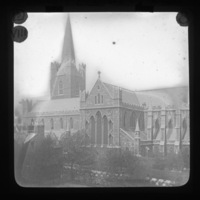 Cathedral of S. Patrick. This venerable pile. according to tradition, occupies the site of an early chapel, erected in 448 A.D. by Ireland's patron saint. [...] The Cathedral stands on marshy ground, in the Island of the Poddle, a place of exceeding sanctity, owing to its direct connection with S. Patrick himself. 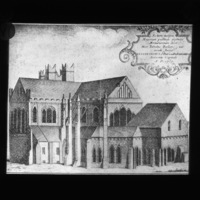 Cathedral of S. Patrick. [...] The Cathedral had a very chequered existence for the succeeding centuries, and was the scene of many turbulent meetings. An old door is shown in the S. Transept which bears witness to the quarrel between the Earls of Kildare and Ormond, representatives of the Red and White Roses. 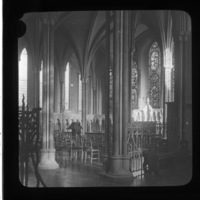 Cathedral of S. Patrick.  [...] The Lady Chapel, said to have been founded in 1270 is believed to have been modelled, so far as its clustered columns with their branching capitals are concerned, on the famous Chapter House of Salisbury Cathedral. [...] In 1899 the exterior of the Lady Chapel was completely renovated by Lord Iveagh. 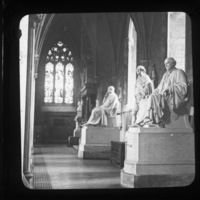 Cathedral of S. Patrick. [...] In the N. Aisle, at its west end, may be noticed the Mayo memorial window (by Heaton & Butler) [...] The monument of one of Ireland's greatest orators, John Pilpot Curran, occupies the first place in this Aisle. [...] The monument to Archbishop Jones (1619) [...] next attracts attention, and further on come, among many others, Chief Justice Whiteside, and a slab in memory of Samuel Lover 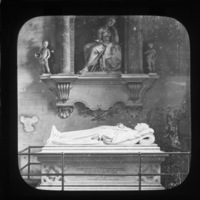 Cathedral of S. Patrick. [...] The tomb of the learned Archbishop Whately stands in the west corner of the Transept. For many centuries this Transept was used as a Chapter House, and in it is preserved the ancient door to which allusion has been already made. 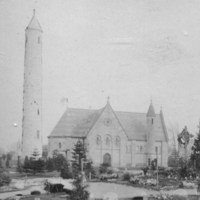 Cemetery, Prospect. [...] The Mortuary Chapel of the Resurrection of our Lord (1879), is a beautiful granite building of Romanesque architecture of twelfth century Irish design [...] The O'Connell Monument consists of a round tower 170 feet in height, in a vault under which the body of the Liberator was laid in 1869, having rested in the O'Connell Circle for twenty-two years. 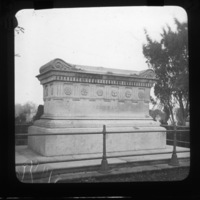 Cemetery, Prospect. [...] Numbers of other tombs of interest can be found. Curran, Sir John Gray, Tom Steel, Dr. Spratt, John Hogan the sculptor, John O'Donovan, the Irish scholar, William Smith O'Brien, Cardinal Cullen, and Parnell, are but a few names chosen at hazard from the many which are household words in Ireland. Many of the tombs are of great beauty, and nearly all are in good taste. 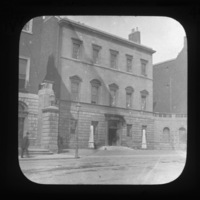 Charlemont House. Charlemont House stands a little back in the centre of Palace-row, the north side of Rutland-square. The house was designed by Lord Charlemont, assisted by Sir William Chambers ; the front is of Arklow stone [...] the first floor has five windows adorned with architraves, and surmonted by pediments, alternately angular and circular. At the sides of the doorway are obelisks which formerly supported lamps, and semi-circular curtain walls with niches and balustrades enclose the space in front.