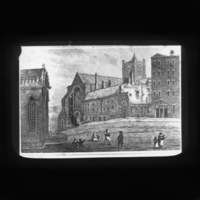 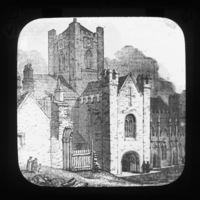 Christ Church Cathedral. [...] 1831 is the last date of degeneration. In it the oblong choir was remodelled, and poor as it always was, it was made still poorer by being robbed of nearly every relic of its original architecture. Another curious alteration was made at the same time, the beautiful Norman door was removed from the North Transept and placed in the South Transept, where it still remains. 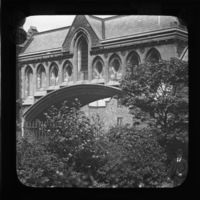 Christ Church Cathedral. [...] The Cathedral is entered through the south porch, from which steps lead to the Synod Hall Bridge ; it contains a handsome marble monument erected by the Royal Dublin Society to Thomas Prior, their founder, ob. 1756. 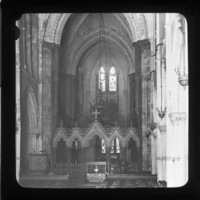 Christ Church Cathedral. [...] The best view of the interior is from inside the west door. As the eyes become acccustomed to the gloom the beauties of the building gradually disclose themselves - the graceful Early English nave, with its old north side leaning out, the baptistery, the screen, the tower arches, the apsidal chancel, the coloured windows, the exquisite tiles. 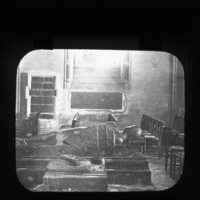 Christ Church Cathedral. [...] In the south aisle is what is known as the Strongbow Monument. It consists of two monuments lying side by side, each on its own block of marble. The larger figure is that of a knight in full armour, and is reported to represent Strongbow ; it is really an effigy substituted in 1570 (the arms on the shield are those of FitzOsmond) 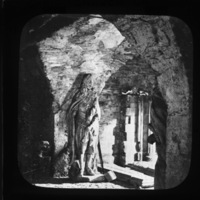 Christ Church Cathedral. [...] Old worn steps lead down into the extensive and well-cared crypt, which is lit by gas, and contains a large number of monuments and antiquities ; only a few can be mentioned. [...] The statues of Chas. II., and James, Duke of York, brought from the THOLSEL, until the restoration stood in the north transept. 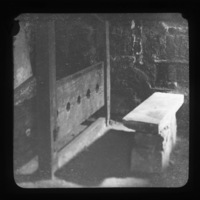 Christ Church Cathedral. [...] The ancient stocks which stood until 1821, in Christchurch-place. 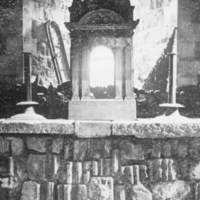 Christ Church Cathedral. [...] The tabernacle and candlesticks used at Mass in the Cathedral in the reign of James II. 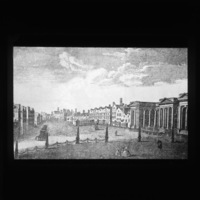 College-green is perhaps as fine an open space as can be seen in any city in Europe. It is surrounded by magnificent buildings, which include the University and the Bank of Ireland.

COLLEGE GREEN AND VOLUNTEERS IN 1784.

College-green [...] The remarkable leaden statue of William III. was erected in College-green in 1701, and has had a very precarious existence, partly owing to the spirit of Jacobitism and partly from the mere love of mischief, which is the usual outcome of college "wines." [...] Later on it became the mustering place of the Irish Volunteers 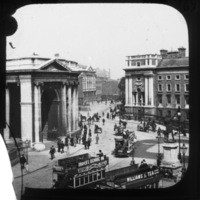 College-green [...] Within recent years great improvements have been made in the buildings in this part of the city, and some of the present buildings will bear comparison with those of any city in the Empire. The great Irish BANKS congregate here ; and the Hibernian, the Ulster, and the National, have all magnificent offices in College-green, while the Royal Bank in Foster-place may be practically regarded as being in College-green.